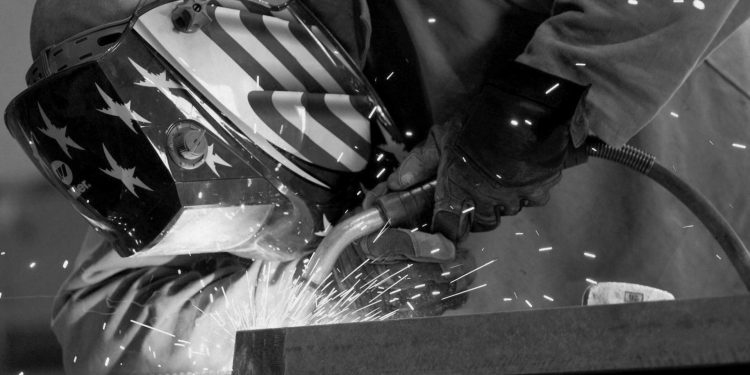 The principle of MIG welding

The electrical arc energy is supplied by a welding power source. The welding current passes through the contact tip of the welding gun to the electrode. Typically, this contact tip is attached to the positive pole of the energy source and the workpiece to the negative pole. Striking the arc will complete the circuit.

The small wire diameter, typically around 1 mm, is fed by a wire feeder with a velocity of a few meters per minute. The length of the arc is then self-adjusted depending on the voltage configuration of the continuous power source.

The shielding gas that protects the electrode, arc and welding pool from the effects of the surrounding air spreads through the shielding gas nozzle which envelops the contact tip. This shielding gas can be either inert, which means that it is inactive and it does not take part in processes occurring in the welding pool, or active.

The filler wire is fed automatically whilst the welding gun is moved manually across the workpiece, MIG welding is commonly referred to as a semi-automatic method. However, the method easily lends itself to automation by mechanizing the actions of the welding gun or by making the workpiece move.

The welding arc is an electrical discharge between two electrodes. The welding current is transmitted from the electrode to the workpiece by means of a heated and ionized gas called plasma. The voltage decline and the current in the arc change the amount of electrical power that is released, the heat through which the electrode and the joint face are melted.

The power that has been developed must also be sufficient to keep the temperature of the arc adequate for the ongoing transport of the current. The temperature holds the ionization of the gas, i.e. it creates electrically charged particles that pass the current.

Based on the choice of shielding gas, varying temperatures are required to keep the plasma ionized. For example, argon is easier to ionize than helium. This means that welding in helium or helium-mixed gasses generates a higher voltage drop and a higher heat input into the welding pool.

When welding a consumable electrode, such as with MIG welding, the arc has two main functions. One is the above-mentioned supply of heat for the melting of materials; another is the transport of the molten electrode material down to the welding pool. This droplet transfer relies very much on the electromagnetic forces as well as the surface tension in the arc area. These forces have a significant influence on the behavior of the welding process and make it viable to differentiate between different arc types.

The heat loss of the arc appears near the surface of the wire electrode and the workpiece. As a result, these anode and cathode areas of the arc have significant voltage drops, and despite their size, more than half of the current voltage drop is present. Thermal equilibrium is achieved because the heat produced by the electrode and the joint is replaced by electrical energy.

The distribution of the voltage in the arc

The arc can be divided into the anode area, the cathode area and the arc column. Normally, the wire electrode is the anode, the positive polarity and the workpiece of the cathode, the negative polarity.

The heat produced in the anode region melts the wire and warms the melted drop. In the same way, the energy generated in the cathode area heats and melts the joint faces.

As an anode voltage can be deemed a constant voltage drop, the heating effect is commensurate to the current. The melting rate is therefore also roughly equal to the current and, at least in theory, independent of the voltage setting. MIG welding is usually used with DC current and a positive polarity electrode. The negative polarity is rarely used because of poor arc stability.

The heat generation of the anode is greater than the cathode. High-temperature drops the transfer of thermal energy to the pool. As welding with a positive electrode gives the most reliable arc as well as the most suitable welding result, this is the traditional polarity for MIG welding.That said AC or DC negative polarity is used in some special cases.

Effect of wire polarity on penetration

The depth of penetration relies on different factors. Heat input and energy density also are important. The angle of both the filler wire to the joint as well as the polarity are other variables which influence weld penetration.

Types of arc for different current and voltage conditions.

The stability of the DC arc with a consumable electrode (i.e. a filler wire) depends mostly on how the molten metal is transferred to the arc. In essence, it is possible to distinguish between short arc (short-circuiting arc) and spray arc. The type of material transfer depends on the voltage/current settings, but also on other parameters such as the gas shielding composition and the wire diameter.

The magnetic forces are small at low currents and are directed up. The droplet hanging at the tip tends to increase in size, and there is a risk that the process will be unstable. Overcome this problem by keeping the length of the arc so short that the droplets dip into the pool before they grow too much.

Wire size The wire size is chosen according to the welding current, but in contrast to the electrodes, each wire has a large and overlapping current range. As a rule, the transfer of the material is a thinner wire smother. When welding with soft aluminum wire, the risk of feeding problems can be reduced by a thicker wire.

Increased voltage equals a wider welding bead. The undercut is a sign that the voltage is too high. If short arc welding is used, higher voltage reduces the short-circuit frequency, resulting in larger drops and more spatter.Too low voltage, on the other hand, increases the risk of stubbing and poor start performance.Short arc welding on thin plates typically will result in higher welding speeds without burn-through. This is optimized by the correct choice of the welding voltage. The same applies to multilayer welds where too high a bead profile may result in a lack of melting for subsequent welding.

Current is indirectly determined by both the wire feed velocity and wire diameter. Your current is the typically the main parameter for welding. The use of maximum welding speed is of interest from a productivity point of view. The general tendency is that a higher speed produces a narrower weld and that the tolerance for all parameter variations decreases at an excessively high speed. The use of special techniques has shown that it is possible to further open the tolerance box and allow higher welding speed and deposition rate.

Spray arc welding is for high currents only. Arc stability in this case is very good and metal is transferred to a stream with small droplets. Heat input and deposition rate in this case is high and therefore welding is limited to horizontal positions and materials over 5 mm thick.

Electrodes for MIG welding are available in a range of 0.6-2.4 mm for use with many different materials. Wires are normally supplied on reels and wounds to ensure that the wire does not snag when removed. Important factors are that your material should be clean with a smooth finish so that it can be easily fed and free from metal defects. The best feed performance is achieved typically with wires coated with a thin layer of copper.

In order to obtain the correct performance of the arc, it is necessary to transfer the current to the electrode near the contact tip. The electrode is normally supplied on coils of 10-15 kg (steel) but a container of about 200 kg can be ordered for high consumption.

One is capable of distinguishing between solid wires and cored wires. The latter type consists of an outer metal sheath, filled with flux or metal powder. Note, the cost per unit of cored wire is higher than that of solid wire im most cases.

A shielding gas is used to stop the molten metal from having harmful effects on the air. Even trace amounts of oxygen will oxidize alloy elements and create slag. The gas also influences the welds properties and is of great importance for the penetration and outcome of your welding beads.

Argon is one of the most trusted shielding gases, thanks to its positive bonding propperties. As an inert gas, there is no chemical interaction with other materials. It is therefore suitable for materials such as aluminum and stainless steel.

Helium, just like argon, is an inert gas. It gives the joint more heat input. Mixed with argon, it increases the welding speed and is advantageous for penetration in thick-walled aluminum or copper where it compensates for high heat conduction. Helium drawbacks are high its costs.

It is a cheap gas, has good properties for welding galvanized steel. Drawbacks are a higher amount of spatter.

Small amounts can be used to increase the heat input and the welding speed in the same way as helium, but this is much cheaper.

Oxygen is also used as a small additive to stabilize the arc in MIG welding.

No Result
View All Result

Weld Pro Magazine (weldpromag.com) is a participant in the Amazon Services LLC Associates Program, an affiliate advertising program designed to provide a means for sites to earn advertising fees by advertising and linking to amazon.com, amazonsupply.com, and myhabit.com.

In general Weld Pro Magazine accepts compensation from the companies featured on this website in the form of affiliate links. The content of our product reviews and descriptions are based on personal experience, independent research and user reviews. Please note that these links do not increase your products cost and help support our online magazine.

No Result
View All Result